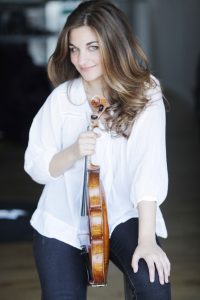 Highlights of the 2016-2017 season include debuts with the Lahti Symphony Orchestra, Mitteldeutscher Rundfunk, and the Fort Worth Symphony, in addition to a tour with the Philharmonie der animato stiftung through Bratislava, Budapest, Berlin, Vienna, and Prague. In the spring, she returns to the Detroit Symphony to work with Carlos Miguel Prieto and the Bournemouth Symphony under James Gaffigan.

Miss Soumm has given recitals at the Auditorium du Louvre (Paris), Palais des Beaux Arts (Brussels), and Wigmore Hall (London) and has also appeared at the City of London Festival, and the festivals of Deauville, Schleswig-Holstein, Verbier, Sommets Musicaux de Gstaad and Varna. She is maintained an involvement with the Seiji Ozawa International Academy in Switzerland for the past 10 years.

Alexandra strongest ties are to France and England where Alexandra has ongoing relationships with many leading orchestras including Paris, Toulouse, Bordeaux, Lyon, Montpellier, and most of the BBC ensembles with whom she worked as former BBC 3 New Generation Artist and London Music Masters Awardee.

Born in Moscow, Alexandra started to learn the violin at the age of five and gave her first concert two years later. She later moved to Vienna to study with the renowned pedagogue Boris Kuschnir and won the Eurovision Competition in 2004. Now based in Paris, she, along with two friends, founded the non-profit organization Esperanz’Arts, whose goal is making the Arts in all its forms accessible to people in schools, hospitals, prisons and homeless shelters.