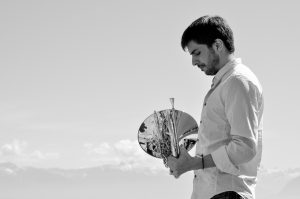 Born in Betanzos (Galicia) in 1986, Antonio Lagares began his musical training at the age of eleven at the music school in his home town. He then went on to study at the Conservatory of A Coruña (Corunna), where he completed his Bacherlor music diploma with honors, specializing in horn and chamber music.

In 2009 he moved to Switzerland to study with Olivier Darbellay at the Haute École de Musique in Lausanne, where he obtained his Master of Arts in Music Performance specializing in orchestra. He was then admitted to Darbellay’s class at the Hochschule für Musik in Lucerne, where he obtained an Advanced Degree in Solo Performance. His final exam took place at the KKL Auditorium, where the Lucerne Symphony Orchestra accompanied him in Richard Strauss’s Second Horn Concerto in E Flat Major.

Lagares has been a member of young formations such as the Galician Youth Symphony Orchestra, the Spanish National Youth Orchestra (JONDE), Verbier Festival Orchestra and Lucerne Academy. He has garnered a series of First Prizes at events such as the Concours d’Interpretation Musicale in Riddes (Switzerland), the Young Spanish Hornists Competition at Alba de Tormes, the “Sonidos del Arlanza” chamber music competition in Burgos (as a member of the Trio Opus 40) and the Novos Intérpretes competition in Ortigueira (Galicia).

Antonio is member of  “Azahar Ensemble” who won the 2nd Prize (1st Prize not awarded) and the Audience Prize at the 63rd International ARD Music Competition in Munich, Azahar Ensemble embarked on an exciting international career that has led them to concertize in prestigious music venues including the Vienna Musikverein, the Philharmonie in Berlin and the Prinzregententheater in Munich, as well as renowned festivals such as the Würzburg Mozartfest, the Santander International Music Festival and the Baden-Baden Festspielhaus.