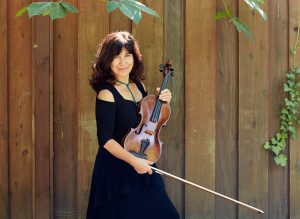 CarlaMaria Rodrigues has been Principal Viola of the San Francisco Opera since 1996. She won her first audition at the age of 23 with the Minnesota Orchestra where she was later appointed Assistant Principal Viola. Serving as the Minnesota Orchestra’s Acting Principal in 1995, she was a featured soloist in Strauss’ Don Quixote with Yo Yo Ma and David Zinman, recorded live on MPR. Since moving to San Francisco, she became a frequent Guest Principal of the Australian Chamber Orchestra where she was later appointed Principal Viola until she left in 2004.

Chamber music activities have taken CarlaMaria throughout the world with such artists as Sir Yehudi Menuhin, Hepzibah Menuhin, Rudolph Serkin and Pinchas Zukerman. She has toured extensively to Europe, South America, Israel and Australia as a member of the Zukerman and Friends’ Ensemble and has been an active participant at numerous Festivals including Marlboro, Santa Fe, Gstaad, IMS Prussia Cove, Aldeburgh, Savannah, Sangat, Mecklenburg and Schleswig-Holstein. In 2012, she traveled to Italy to work on a recording project of chamber music works by Koechlin and later that year collaborated with Menachem Pressler, Daniel Hope, Lorenza Borrani and the Emerson String Quartet at the Savannah Music Festival. In 2013 CarlaMaria performed the Loeffler songs with Anne Sofie von Otter at the Savannah Music Festival and later that summer was invited to play Principal Viola with the Chamber Orchestra of Europe under the direction of Nikolaus Harnoncourt in Graz, Austria. In 2014 she performed with Anthony Marwood and Richard Lester at the Peasmarsh Festival and in November was invited to present a recital and Master Class at the 42nd International Viola Congress in Porto, Portugal where she performed with Lorenza Borrani and Simon Crawford-Phillips as a member of The Borrani Trio. In 2015 she was again invited to play Principal viola with the Chamber Orchestra of Europe on a tour of Italy under the direction of Andras Schiff and later that summer performed at the Schleswig-Holstein Festival and the Bristol Proms with Daniel Hope. In 2016, she performed with the Danish String Quartet and also performed the Sinfonia Concertante with Lorenza Borrani and L’Arte Del Mondo at the Savannah Music Festival.

CarlaMaria has become a much sought after teacher and has been a regular guest teacher of the Jerusalem Music Center, coaching chamber music and orchestral studies to aspiring young musicians from all over Israel, including the Young Israeli Philharmonic. From 2016 to 2018 she was the Adjunct Professor of Viola at UCLA Herb Alpert School of Music and this past summer was a Guest Faculty Artist of the Aspen Summer Music Festival. Earlier this year CarlaMaria was invited to participate in Euphony 2018, a cooperative project of chamber music and orchestral training with the University of Music and Performing Arts in Graz (Austria) and the Anton Bruckner Privatuniversität (Linz). This project was in collaboration with the University of Ljubljana (Slovenia), the Franz-Liszt-Academy Budapest (Hungary), the Zagreb Academy of Music (Croatia), the University of Arts Belgrade (Serbia), the Academy of Music Sarajevo (Bosnia and Herzegovina) and the Orchesterzentrum NRW (Germany). Future projects in 2019 include a tour of Austria, Belgrade and Zagreb with EUphony 2019, Performing at the Savannah Chamber Music Festival and the Schleswig-Holstein Festival.

A native of London, CarlaMaria entered the Yehudi Menuhin School at the age of ten. She studied both violin and viola and her instrumental and chamber music teachers included Robert Masters, Peter and Margaret Norris, Hans Keller, Felix Andrievsky, David Takeno and Nadia Boulanger. From an early age she appeared as both soloist and chamber musician in London’s major concert halls and has been heard on the BBC Radio and Television Network and Performance Today on American Public Media.