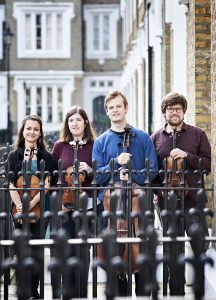 The Castalian Quartet is rapidly emerging as an exciting voice on the international chamber music scene.

Engagements this season include performances of the complete Haydn Op. 76 Quartets at Wigmore Hall, and concerts in the Tel Aviv Museum of Art, Heidelberger Frühling Festival, and Zwischentöne Festival in Engelberg. Further afield they take part in the Banff Festival in Canada and tour throughout China and Colombia.

Future plans include debut concerts in North America (Phillips Collection Washington D.C. and Lincoln Center New York) and at the Konzerthaus in Vienna.

Formed in 2011, the Castalian Quartet studied with Oliver Wille (Kuss Quartet) at the Hannover University of Music, Drama and Media, graduating with a Master’s degree.

The revelation, though, was the silvery playing of the Castalians in a relatively early Quartet (D353) by the 19-year-old Schubert, in which first violinist Sini Simonen’s intonation-perfect spirit highlighted her role within the ensemble.
Arts Desk / East Neuk Festival / June 2017

The Castalian Quartet makes the simplest things we hear into the most important things we could ever want to hear.
Calgary Herald / Banff International Competition / September 2016

Their level of ensemble inter-connectedness in the Adès and at times in the subsequent movements of Brahms and Schumann was truly remarkable in evincing a physics most rare and special, overlaid with an emotional world of similarly surpassing sublimity. There were times that I simply could not believe my ears.
Calgary Herald / Banff International Competition / September 2016