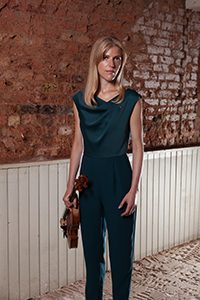 Hélène Clément is born in France in 1988,

Following her passion as a chamber musician, she has performed at the Queen Elizabeth Hall and the Wigmore Hall in London, Carnegie Hall in New York, the Kimmel Center in Philadelphia, the Concertgebouw in Amsterdam, the Konzerthaus in Berlin, the Salle Cortot and Cité de la Musique in Paris, and in the most prestigious concert halls in Europe and the world.

Since September 2013, she is the viola player of the Doric String Quartet, with which she performs around the world. Recent highlights include recitals at the Amsterdam Muziekgebouw, Vienna Musikverein, Frankfurt Alte Oper, Hamburg Laeiszhalle and De Singel, and regular performances at the Wigmore Hall.

Since 2010 the Quartet has recorded exclusively for Chandos Records. Future releases will include works by Haydn, Britten and Mendelssohn.

In 2018 the Quartet has become Artistic Directors of the Mendelssohn on Mull Festival, in Scotland.

Ms. Clément is a frequent guest at the prestigious Marlboro Music Festival in America and Prussia Cove in England.

Ms Clement is currently playing on a 1843 Italian viola owned previously by Benjamin Britten and Frank Bridge. The viola is generously lent to her by the Britten-Pears foundation.