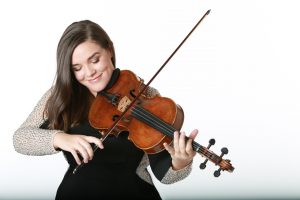 Violist and director JENNIFER STUMM is recognized as one of the world’s dynamic and creative advocates for her instrument, known both for her distinctive sound and unbridled enthusiasm for music. Hailed by the Washington Post for the “opal-like beauty” of her playing, Stumm appears on many of the world’s great stages, including Carnegie Hall, the Kennedy Center, the Concertgebouw, Sala São Paulo, and the Wigmore Hall, London. Her solo career was launched after victories in three major international competitions: William Primrose, Geneva and Concert Artists Guild (where she was the first violist ever to win First Prize.)  Recent and upcoming highlights include her solo debut at the Berlin Philharmonie, performances with orchestras on four continents, the complete chamber works of Brahms in Tel Aviv and Amsterdam and directing from the viola across South America.

An enthusiastic speaker and writer about music, Jennifer Stumm’s TED talk about the viola and the blessings of being different, “The Imperfect Instrument,” was named an editor’s pick of all talks on ted.com and she was recently cover artist of Symphony Magazine.  She recorded Berlioz’s Harold in Italy for Orchid Classics and has performed the work in her unique staging and characterization almost fifty times. Her debut recording for Naxos’ Laureate Series, of virtuoso works by Italian composer/violist Alessandro Rolla, received high critical praise. A recipient of the BBC New Generation artist and Borletti Buitoni Awards for her work in chamber music, she appears at major festivals such as Verbier, Marlboro, Spoleto, Aldeburgh, Delft and IMS Prussia Cove.  Her collaborative partners have included members of the Beaux Arts Trio, Guarneri, Vermeer and Alban Berg Quartets and the period ensemble L’Archibudelli.

In 2015 she founded the Ilumina, which has rapidly risen to become Brazil’s leading chamber music festival as well as risk-taking creator of content and forward-thinking social advancement project.  Since her school days teaching strings in the Atlanta inner city, Jennifer has been devoted to the power of art to inspire social progress in us all. Ilumina unites leading young talents from Latin America with international soloists in the belief that diversity in narrative will create exciting musical results and new possibilities for a worthy generation of urban artists from the Global South. Ilumina is now in great demand internationally, known for its energy, its fresh and unusual programming and for connecting audiences to the humanity in music.

Born in the United States of Cherokee and German heritage, Jennifer chose the viola in her school orchestra because she thought it had the most beautiful sound. She went on to study with Karen Tuttle at the Curtis Institute of Music and the Juilliard School and also pursued interests in politics and astronomy at the University of Pennsylvania.  Her other important mentors were Nobuko Imai and Steven Isserlis.  Jennifer Stumm is currently International Chair of Viola Studies at the Royal College of Music, London and gives masterclasses around the world. She performs on a viola by Gasparo da Salò, c 1590, generously on permanent loan from a private collection.