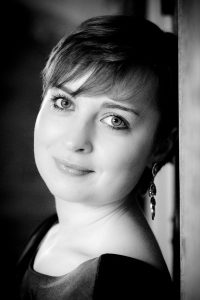 Consistently earning praise for her outstanding stage presence and vocal performances, British mezzo-soprano Katie Bray has fast established herself as an artist to watch.

Equally at home on the concert platform, Katie Bray has performed in prestigious venues such as the Wigmore Hall, Cadogan Hall, and the Holywell Music Room and she appears regularly in the London English Song Festival, where she directed concerts at Wilton’s Music Hall, as well as at the Oxford Lieder Festival for which she recently recorded a disc of Schumann songs with Sholto Kynoch. She is particularly noted for baroque repertoire and has appeared with Barokksolistene and Bjarte Eike, Monteverdi Choir and Sir John Eliot Gardiner, La Nuova Musica, Ludus Baroque and Spira Mirabilis.

Katie Bray graduated as a Karaviotis Scholar from the opera course at the Royal Academy of Music, and was awarded the Principal’s Prize and won First Prize in the Richard Lewis Singing Competition.