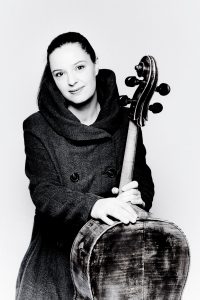 French Catalan cellist Marie Bitlloch is a founding member of the Elias String Quartet who perform extensively in the UK, Europe, the US and Australia.

They have been BBC New Generation Artists and the recipient of a Borletti Buitoni Trust Award, which helped them with their groundbreaking Beethoven Project: performing and recording the complete string quartets of Beethoven, and documenting their journey on a dedicated website: www.thebeethovenproject.com. Broadcast by BBC Radio 3 and performed in 11 major venues in the UK, the Quartet recorded the cycle for the “Wigmore Hall Live” label. Six albums in total, released between 2015 and 2018.

Current and future highlights include a US and Canada tour including Carnegie Hall, New York, concerts at Concertgebouw, Amsterdam, and Edinburgh festival, Scotland, a return visit touring Australia, and a Schubert series at Wigmore Hall.

They are Ensemble in Residence at the Royal Northern College of Music of Manchester, visiting regularly for coaching and concerts.
Their discography includes discs of all Beethoven quartets, Britten quartets, Schumann quartets, Mendelssohn quartets, two mixed Wigmore Live CDs, and a disc of Piano Quintets with Jonathan Biss.

Marie studied in Perpignan Conservatoire, Paris Conservatoire and RNCM in Manchester, with Michel Lefort, Philippe Muller and Ralph Kirshbaum. She won numerous prizes including second prize at the Adam competition in New Zealand, jury’s prize at the Bach competition in Leipzig, the Muriel Taylor Scholarship, and an incentive grant at the Pierre Fournier award. For three years she was a laureate of the Natexis foundation, Banque populaire, who helped her with her musical projects.

Marie is one of the artistic directors at the Festival & Rencontres de Musique de Chambre du Larzac in France. She plays on an anonymous eighteen century Italian cello.