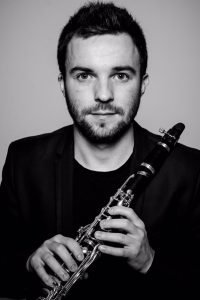 Born in 1989 Miquel Ramos began his musical education in the Premià de Mar Music School with Francesc Navarro. At the age of 12 he attended Badalona Music Conservatoire, where he studied with Xavi Castillo. In 2007 he was admitted in the Superior Music School of Catalonia (ESMUC, Barcelona). There he studied with Josep Fuster and took musical advices from musicians like Lorenzo Coppola and the Casals Quartet.

In July 2013 he finished the Master of Music at the Musikhochschule Lübeck with the international soloist Sabine Meyer, with honorable mention. He has received some scolarships from the JONDE/BBVA and the Possehl Stipendium foundations. During the two years in Lübeck he was academist in the Philharmonisches Orchester Lübeck.

Miquel had his first orchestral experiences in some young orchestras like JONC (Catalan Youth Orchestra) and JONDE (Spanish Young Orchestra). After few years he has been invited as guest teacher in some of these orchestras.

Since 2017 he is member of the quintet Azahar Ensemble, winner of the ARD Competition in 2014, and with which he has performed at the Berliner Philharmonie, Musikverein Wien, Mozarteun Salzburg, Philharmonie Essen, Elbphilharmonie Hamburg and Baden Baden Festival, among others.

He is also member of the project Spira Mirabilis.

In May 2016 makes his début as soloist playing the Carl Nielsen’s clarinet concerto with the Orquestra Camera Musicae at the Palau de la Música in Barcelona.