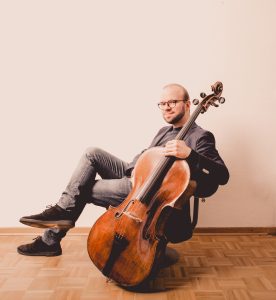 Recent winner (2016) of the first prize at the XX International J.S. Bach Competition in Leipzig, Paolo Bonomini is currently solo-cello in Camerata Salzburg.

His debut CD, Violoncello Italiano published by Genuin Classics received praise from various sources and was declared ‘record of the month’ on Fono Forum, one of Germany’s main music magazines. A review on Italian music journal Archi spoke of the “beauty and uncommon qualities” found on the CD.

He began studying the cello under the guidance of P. Perucchetti at the L. Marenzio Conservatoire in Brescia, Italy. He went on to obtain his Bachelor’s degree with the highest marks, honours and distinction. Student of Mario Brunello, Antonio Meneses and Jens Peter Maintz, Paolo has participated in masterclasses with Giovanni Sollima, Enrico Dindo and David Geringas.

He is Jens Peter Maintz’s assistant at the Universität der Künste in Berlin.

He has worked in the Symphonieorchester des Bayerischen Rundfunks and was invited as guest principal cello in the Deutsches Symphonie-Orchester Berlin, Camerata Bern and Mahler Chamber Orchestra.

These and other orchestral collaborations led him to play under the baton of Claudio Abbado, Mariss Jansons, Riccardo Muti, Daniel Harding, Herbert Blomstedt, Sir Roger Norrington and Yannick Nézet-Séguin.

Being part of the project “Tenebrae, il principe dei Musici”, Paolo has toured some of the most important Italian theatres alongside Giovanni Sollima. They include A. Ponchielli in Cremona, Teatro Olimpico di Vicenza, San Carlo in Napoli and numerous other venues.

Paolo is also the founder of the Boccherini Trio, that had its debut concert in the prestigious Wigmore Hall in London in 2016. The trio, formed by violinist Suyeon Kang and violist Vicki Powell, regularly performs in Italy and Europe. The trio is coached by Rainer Schmidt from Hagen Quartet and Hatto Beyerle, founder of the Alban Berg Quartet.

Paolo has performed many times live on Italy’s Radio RAI 3, both as soloist as in chamber music ensembles. Together with cellist Amedeo Cicchese, he forms the Duo Janigro.