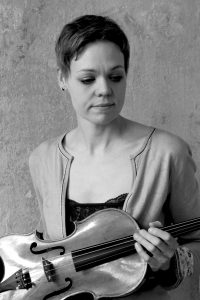 Born in Karlsruhe/Germany, she studied modern viola with Wolfram Christ at the Musikhochschule Freiburg and then continued her studies with Tabea Zimmermann at the Hochschule für Musik „Hanns Eisler“ Berlin, where she now holds a teaching position.

When she exchanged the violin for the viola, age 9, she soon formed her first string quartet and quickly, it became obvious that chamber music would always feature strongly in her life, as she loves the communicative role of a middle voice and the complex soundworld of the lower instrument. Thus she has appeared at major German and International chamber music seasons such as Teatro La Pergola in Florence, Teatro La Fenice in Venice, Carnegie Hall in New York, KKL Luzern, Cité de la Musique Paris, at the Philharmonie Berlin, Heidelberger Frühling, Rheingau Musikfestival, to name a few. In 2017, she formed a string quintet that dedicates its time exclusively to the study and performance of the six String Quintets by Wolfgang Amadeus Mozart, on period instruments.

Simone Jandl has been a member of Lucerne Festival Orchestra 2003-2011, Orchestra Mozart Bologna 2004-2012, the Spira mirabilis project since 2007 and the Chamber Orchestra of Europe since 2009. She is a regular guest with the Dunedin Consort Edinburgh, Berlin Philharmonic Orchestra, Konzerthausorchester Berlin, Kammerakademie Potsdam and Arcangelo Ensemble London. In 2016, she was appointed principal viola in the Orchestra of the Age of Enlightenment.

As a soloist with orchestra, she has appeared with the Baden-Badener Philharmonie, the Philharmonie Südwestfalen, the Hamburger Camerata, „El Teatre Instrumental“ Barcelona, the English Haydn Orchestra and the WDR Sinfonieorchester Cologne.