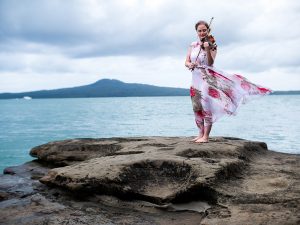 “I live to make music. It is the most direct way to touch the heart of humanity. Offering something pure and intangible to take away with them. In this small way I try to give something good back into the world.“

Growing up in New Zealand with a Swiss father and South African mother, then moving to Switzerland in 2004 has given Simone quite a multicultural background. As well as classical music, Simone has travelled to Tokyo to perform in a concert dedicated to “World Peace” with a hip hop group; and when she was 8 years old toured China, Taiwan and Japan with the Swiss Kiwi Yodelers’ Group playing Appenzell music.

Simone travels around the world not only playing in different ensembles like Spira mirabilis, Camerata Bern, Lucerne Festival Strings, Geneva Camerata, but also as chamber musician and soloist in Switzerland, France and New Zealand.

She plays an important part in the music scene in Bern as Concertmaster of Opus Bern and Orchestra degli Amici, leads the second violins in the Berner Chamber Orchester, plays regularly in Camerata Bern, and is the 1st violinist in the chamber ensemble La Strimpellata Bern. She works as Concertmaster and tutti player in Geneva, Aarau and Chur. Last year involved concerts in Israel, England, Spain, Turkey,  Max Bruch’s Violin Concerto in New Zealand and Switzerland, followed by a tour of New Zealand with the Paladino Ensemble in collaboration with Chamber Music New Zealand. The highlight of 2017 was being invited to lead the BBC Symphony Orchestra in London in the Barbican under Maestro Sakari Oramo.