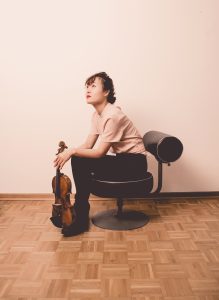 Praised for her innate sensitivity and extraordinary flexibility as a musician- ‘…nowhere was violinist Kang found wanting…’ (Dominion Post, 2016), as well as her depth of understanding- ‘…incredible maturity…more than mere playing of the music but an appreciation and understanding of the possibilities of the music and brought out qualities of ecstasy, pathos and introspection. Kang’s playing at times appeared to be a human, animal or avian presence, intruding into the landscape or soaring above it.’  (National Business Review, 2015), Korean-Australian violinist Suyeon Kang secured the 1st prize and audience prize at the 2015 Michael Hill International Violin Competition (New Zealand).

Since then, she has performed as soloist with many orchestras throughout Australia, New Zealand, Europe and Asia. Her first CD was released under ABC Classics at the age of 16. Her second album was released in 2017, featuring works by Bartok and Bloch, under the Atoll Label.

In 2014 she co-founded the Boccherini Trio (String Trio), to which she dedicates a large part of her musical life. The trio have received important musical impulses from Rainer Schmidt and Hatto Beyerle, as well as from Johannes Meissl, Avedis Kouyoumdjian, Natascha Prischepenko and Günter Pichler. Several successful performances all throughout Europe and Australia have led to glowing reviews- ‘A spectacular moment of chamber-music making…from their first note, they offered such a fine, unified sound that captivated each member of the audience’ (LiveKritik, 2014).

As an orchestral musician, she has appeared in leading positions with the Munich Chamber Orchestra, Deutsches Symphonie Orchester, Camerata Bern, Ensemble Kontraste, the Euro-Asian Philharmonic, amongst others. Since 2017 she holds a post in the 14-member ensemble Camerata Bern, in Switzerland. Further appearances with the Kammerphilharmonie Bremen, the Geneva Chamber