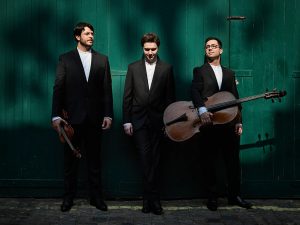 Formed in 2009 at the Guildhall School of Music & Drama, in 2015 the Trio Isimsiz won 1st Prize and the Audience Prize at the Trondheim Competition, and in 2017 2nd Prize at the Haydn International Competition in Vienna. They were selected by Young Classical Artists Trust (YCAT) in 2013 and in 2018 won a Borletti-Buitoni Trust Fellowship Award.

The Trio has performed widely in Europe, highlights including recitals at the Stavanger, Mecklenburg-Vorpommern, Peasmarsh and Gower Festivals (broadcast by Radio 3), the Tivoli Concert Hall, Snape Maltings, Fundacion Juan March in Madrid and Marianischer-Saal in Lucerne.  Further afield the they have undertaken tours in China and Argentina.

In 2017 the Trio returned to the Aldeburgh Festival and completed their first CD released by Rubicon in November. Engagements this season include an all Beethoven programme at the Théâtre des Abbesses in Paris, concerts at the Köln Philharmonie, Trondheim Chamber Music Festival and recitals at Wigmore Hall, Brighton Dome, Saffron Hall and Snape Proms.

The Trio Isimsiz are currently Fellows at the Guildhall School of Music & Drama.   They have collaborated with Anthony Marwood, Krysztof Chorzelski, Richard Lester and Aleksander Madzar and attended IMS Prussia Cove working with Ferenc Rados.

All three members of the Trio Isimsiz Piano Trio enjoy great success individually. Erdem Misirlioglu was a Concerto Finalist in the BBC Young Musician competition in 2008, Pablo Hernán Benedí is a member of the Chiaroscuro Quartet, formed by Alina Ibragimova, and Michael Petrov represented the UK in the European Concert Halls Organisation Rising Star series.

Pablo Hernán Benedí was born in 1991 in Madrid.  He studied at the C.I. Padre Antonio Soler Conservatory in San Lorenzo de El Escorial and at the GSMD with David Takeno.  In 2010 Pablo became a member of the Chiaroscuro Quartet, formed by Alina Ibragimova, Emilie Hornlund and Claire Thirion, appearing at major venues throughout Europe. The Quartet’s debut recording was released in 2011 to critical acclaim.

Michael Petrov was born in 1990 in Bulgaria.  He studied at the Yehudi Menuhin School and at the GSMD with Louise Hopkins, winning the Gold Medal in 2014.   Over the two years he has made his debut with the Philharmonia, Royal Philharmonic, Bournemouth Symphony and English Chamber Orchestras.  During 2014/15 he gave recitals at major concert halls throughout Europe as part of his nomination by the Barbican Centre as an ECHO Rising Star.

Erdem Misirlioglu was born in 1989 in Suffolk.  He studied with Mark Fielding at the Junior GSMD and since 2008 with Martin Roscoe and Ronan O’Hora at the GSMD.  In 2008 he was a Concerto Finalist in the BBC Young Musicians Competition, performing Rachmaninov’s Rhapsody on a Theme of Paganini with the BBC National Orchestra of Wales.  He recently won 1st Prize in the Beethoven Piano Society of Europe’s Intercollegiate Piano Competition.

In the Isimsiz’s hands, the melodic fragments [of Takemitsu’s Between Tides] fit together like an exquisite mosaic… this is an outstanding debut disc by the Trio Isimsiz, whose unusually thoughtful interpretations are presented with dazzling technical mastery.
Gramophone / Rubicon CD / March 2018

This trio with no name is one to remember … a debut recording we should all listen to… it’s hard to know how Trio Isimsiz could have bettered such artistry and distinctiveness.
The Strad / Rubicon CD / February 2018

An impressive debut for the Trio, it’s a piano trio that already has that vital combination of unanimity of ensemble and musicianship, plus plenty of individual character and vitality.
Andrew McGregor, BBC Radio 3 Record Review / Rubicon CD release / November 2017

The real highlight of this year’s festival were the performances of the Trio Isimsiz….they are well-matched players who demonstrated exquisite ensemble playing in their performances.
IOCO – Kultur im Netz / Festival de Stavanger Norway / August 2016