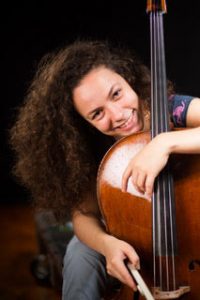 Born near Zürich, Ursina Braun started playing the Cello at the age of six. After studying in Switzerland with Thomas Grossenbacher, she moved to Salzburg where she did her Bachelor degree with Clemens Hagen.
After that, she continued her studies with Heinrich Schiff in Vienna until his death in December 2016. Back in Salzburg, Ursina is now finishing her Masters with Clemens Hagen.
Ursina Braun has won several prizes; she won the first prize at the international Mainardi Competition of the Mozarteum Salzburg in 2012 and the „Bachpreis“ and the audience award at the Bach Competition Leipzig 2016. Lately she won the Studienpreis at the instrumental competition of the Migros-Kulturprozent in Switzerland.
Since 2009, Ursina has been a member of the project Spira mirabilis that plays orchestra and chamber music repertoire from the baroque to the modern period. The group has performed all over Europe in some of the greatest concert halls.
One of Ursina’s great interests is the historically informed performance. Since 2016 she reguarly performs with the ensemble Concentus Musicus Vienna founded by Nikolaus Harnoncourt.
Ursina Braun has been composing since a very early age and has been awarded the first prize at the composition competition of Schweizer Tonkünstlerverein and Camerata Zürich on multiple occasions. Her work has been commissioned by the Musikkollegium Winterthur and Schweizer Oktett among others.