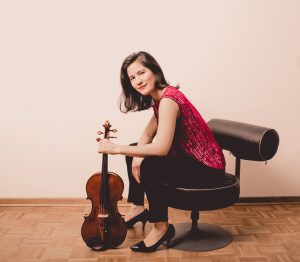 Praised by the New York Times for her “probing introspection”, and by the Philadelphia Inquirer as “a star” with “a voluptuous tone,” violist Vicki Powell has appeared as soloist with the Philadelphia Orchestra, the Milwaukee Symphony, the Aspen Festival Orchestra, and the Wisconsin Chamber Orchestra, and has been a featured artist at the Verbier, Ravinia, Caramoor, Moritzburg, and Marlboro Music Festivals.

Ms. Powell is the recipient of a Gold Award in Music from the National Foundation for Advancement in the Arts. Other awards include Third Prize and the Sonata Prize at the 2011 Primrose International Viola Competition, as well as First Prizes of the Philadelphia Orchestra Greenfield Competition, the Johansen International Competition, and the Aspen Low Strings Competition.

An avid chamber musician, Ms. Powell performs throughout Europe with the Boccherini String Trio. She has toured with Musicians from Marlboro, Musicians from Ravinia’s Steans Institute, and Curtis on Tour, and performs with the Jupiter Symphony Chamber Players in New York City. Recent highlights include performances at the Rheingau Music Festival, Zurich Tonhalle, and Konzerthaus Berlin as well as with Christian Tetzlaff and Steven Isserlis at Kronberg Academy’s Chamber Music Connects the World. She has also previously collaborated with such reknowned artists as Mitsuko Uchida, Nobuko Imai, Arnold Steinhardt, Pamela Frank, Ida Kavafian, and Peter Wiley.

In addition to her pursuits as a violist, Ms. Powell is passionate about using music to engage communities from diverse backgrounds in order to strengthen social ties, as well as to raise awareness for humanitarian efforts across the world. As Director of the Verbier Festival Academy’s “Reaching Out” program, she helped enable musicians to harness and broaden their outreach, business, networking, and leadership skills in order to be innovative and active participants within their own communities. Ms. Powell has also collaborated with the Medair organization (relief.medair.org), which helps people who are suffering in remote and devastated communities around the world survive crisis, recover with dignity, and develop skills to build a better future.

Ms. Powell began her musical studies in Madison, Wisconsin with Eugene Purdue and Sally Chisholm. She is a graduate of the Juilliard School and the Curtis Institute of Music where she studied with Misha Amory and Roberto Diaz, and is currently pursuing studies with Máté Szűcs, Principal Violist of the Berlin Philharmonic, at the Hochschule für Musik “Hanns Eisler” in Berlin. She plays on a copy of the Primrose Guarneri by Samuel Zygmuntowicz.